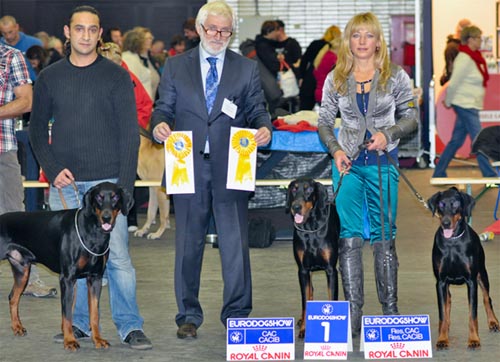 But the surprise was our 11 month young Russkaja Mechta Partizan Pantowy. He was not only Best Junior but was also in the final selection considered as Best of Breed before his father. This is a nice compliment for me as a breeder and for his father Mustang as a good producer. It is a rather serious statement about yourself when at the age of 11 months you beat your father. Later in the honour ring of the second groop he entered the top ten. But in the competence among the best juniors of all breeds he was rated even higher. Partizan became Third Best Junior of the Eurodogshow and was awarded a special trophy of Mr. Henri Misselyn for the best Youth Dobermann.

It was a great day for us, we drove home with a lot of prices, to the birthday party of my daughter who turned 15 and had to miss her mom that day.